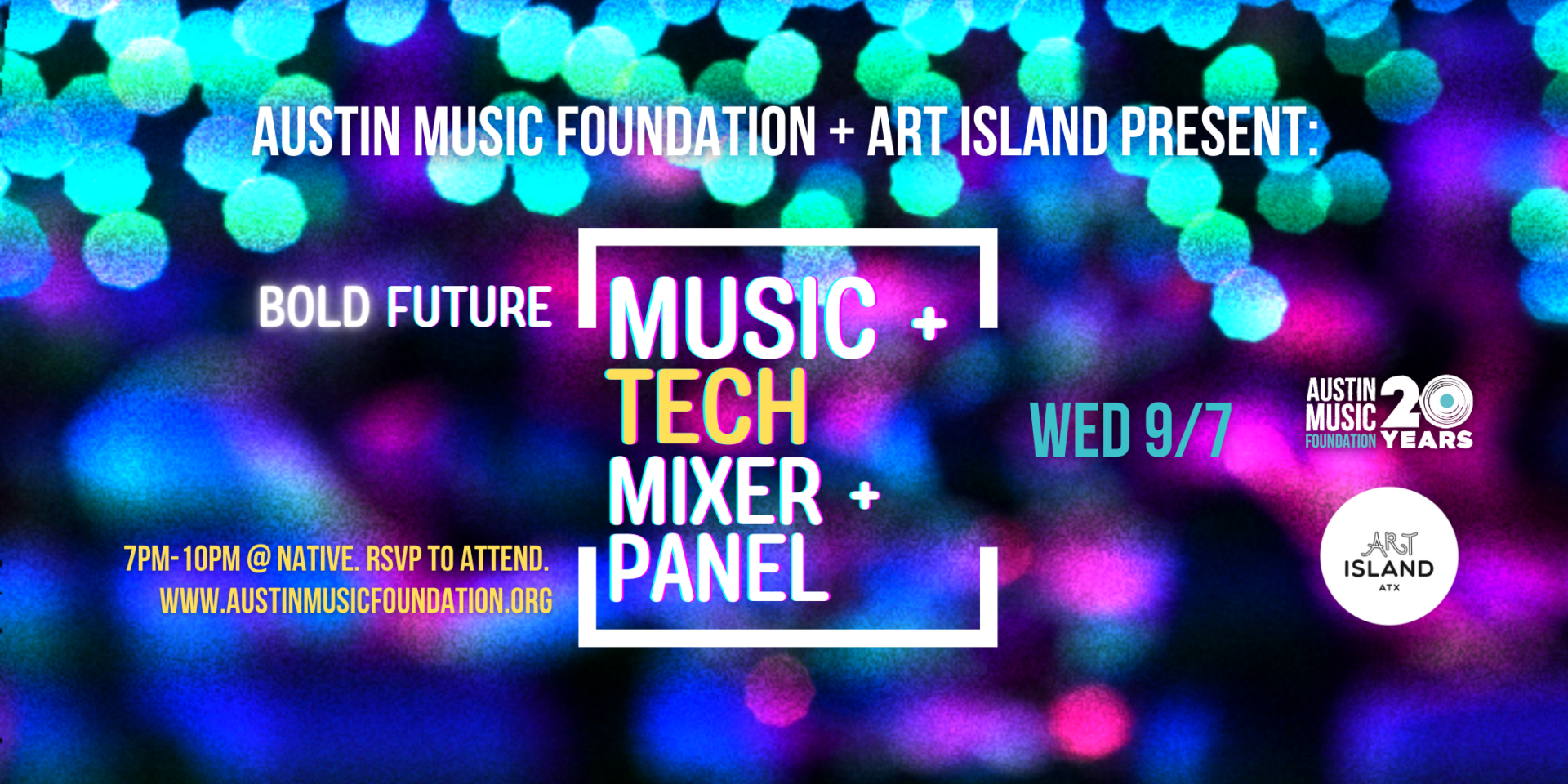 amf in-person mixers are back!!

AMF is thrilled to partner with Art Island to bring you ‘Bold Future Music + Tech Mixer + Panel’ on September 7th at Native Hostel. Join us for a fun and immersive evening as we connect and learn among fellow peers, musicians, creatives, and artists!

We’ll kick off the event with a very special and informative panel on the ‘Intersection of Music and Tech and its Future Together’ with experts from the tech, creative, and music fields. Stick around after the panel for casual networking plus an experiential activity featuring Art Island’s interactive art and sound installation, ‘Wizard’s Library.’ More details below. We can’t wait to see you there!

Austin Music Foundation (AMF) is a 501(c)3 non-profit organization whose core mission is to strengthen, connect, and advance the local music industry and community. Founded in 2002, AMF is highly engaged in developing initiatives that facilitate the growth and sustainability of Austin’s creative class and remains one of the nation’s only arts service organizations dedicated to providing year-round music business training, educational resources, mentoring and professional development to artists and industry professionals at all stages of their careers. As one of the city’s first-established cultural music institutions, AMF has led the way in ensuring Austin’s continued distinction as a world-renowned, iconic Music Capital.

Art Island is a ladies-led art collective and creative agency. What began as a gathering on the banks of the Colorado has evolved into a community-powered platform for showcasing, celebrating, and commissioning the arts. We currently operate out of our Pink Eastside Warehouse where we hold monthly events

Wizard’s Library is an interactive art installation that brings intuitive relationships with touch, imagery, music, and sound together. Touch-sensitive spellbooks bring a projected painting to life with motion and music. This installation was created using software such as Touchdesigner, touch to midi mapping technology, Resolume, and other analog sound technology.

Aaron Lemke is a musician and designer focused on using technology to empower musicians and build new forms of creative expression. He is a Co-Founder and Chief Creative Officer at Wave XR where he has collaborated with artists including Justin Bieber, The Weeknd, John Legend, Flying Lotus, Imogen Heap, and Steven Spielberg to create ground-breaking virtual entertainment experiences.

Primo the Alien is the alter-ego of Austin-based synthpop/retrowave/synthwave artist and producer, Laura Lee Bishop. Bishop is a graduate of the esteemed Clive Davis School of Recorded Music at New York University and a two-time golden ticket recipient on American Idol. A recipient of the prestigious Abe Olman Award for Excellence in Songwriting from the Songwriters Hall of Fame, Primo’s most recent release, “Heart on the Run,” reached #1 on the Bandcamp pop charts and landed several Spotify editorial playlists. She is steadily releasing singles as part of a full-length album and will be playing Austin City Limits Music Festival alongside Lil Has X, SZA, Flume, Kacey Musgraves, Paramore, and Pink in the fall. A multi-instrumentalist and producer, Primo’s style defies the bounds of traditional genres, serving modern tracks drenched in otherworldly futurism with a retro edge. Her fearlessness, unrelenting intensity, and eccentric bravado are balanced with levity, effervescence, and imagination, delivering a musical punch that is as undeniable as it is needed. In a sea of strobe-light pretenders, Primo the Alien is a disco ball ablaze.

Dominique Davis is the Founder of Psychojelly, a creative software company based in Austin, Texas, blending the world between immersive experiences and live production. After starting in live production visuals doing over 500 performances over 5 years, Psychojelly started creating applications for performers to cue and control visuals from the stage. After refining this, they removed the stage element to create interactive systems in which the audience can control the experience of audio and visuals in an immersive environment. Since then, they’ve helped build experiences and stage applications for Fortnite World Cup, Coachella, Disney, T-Mobile, Intel, Machine Gun Kelly, Indy 500, Gensler, Tipper, SXSW, Meow Wolf, University of Texas Neuroscience, and Lighting In a Bottle festival.

Jonathan Horstmann is a multidisciplinary artist and the leader of Urban Heat, a 3-piece American post-punk band from Austin, TX. Over quarantine, Jonathan picked up analog synthesizer sounds, using hardware and drum machines to fuse dark 80’s stylings with modern flourishes. His throaty baritone delivers musings on existence and romanticism against an unrelenting industrial gothic pulse. Joined on stage by Kevin Naquin and Paxel Foley, Urban Heat’s live show is undeniably energetic and engaging, earning them slots at Austin’s Levitation and Seattle’s Freakout Fest in 2021. They released 6 singles between 2019 and 2022 and while the pandemic saw their SXSW 2020 performance canceled, they returned in 2022 as official artists.

This year has brought exponential growth to the band. Atomic Music Group took Urban Heat on for North American booking and their first national tour is planned for the fall. They were selected as Black Fret grant recipients and are featured as KUTX 98.9’s Artist of the Month for July. The band will be playing the Austin City Limits festival in October. The Wellness EP was released on Spaceflight Records on July 26, 2022.

Named one of the Austin Chronicle’s “20 of 2020,” SoundSync Music owner Nathalie Phan (see also: dog mom, bad tennis player) sees entrepreneurship as a responsibility as much as it is a privilege. As a values-oriented leader born and raised in Houston, she has made it her life’s mission to put Texas musicians on the map. In 2015, while still a Digital Media Management student at St. Edward’s University in Austin, Texas, she founded On Vinyl Media as an umbrella organization for her many creative ideas on building and sustaining a local music ecosystem and local music industry infrastructure. One of the businesses under this umbrella is SoundSync Music, a boutique sound design agency which licenses local music to both indie filmmakers and large production houses alike. In her official capacity, she has led and participated in workshops, panels, and university guest lectures on entrepreneurship and music licensing.

Nathalie is the Asian-American and 1st generation daughter of Vietnamese refugees. She has been on the boards of multiple equity-related music non-profits such as EQ Austin, Kids in a New Groove, and Girls Rock Austin and is known to advocate locally for musicians’ rights, specifically on equity-related topics.