AMF + KUTX Present The NEXT 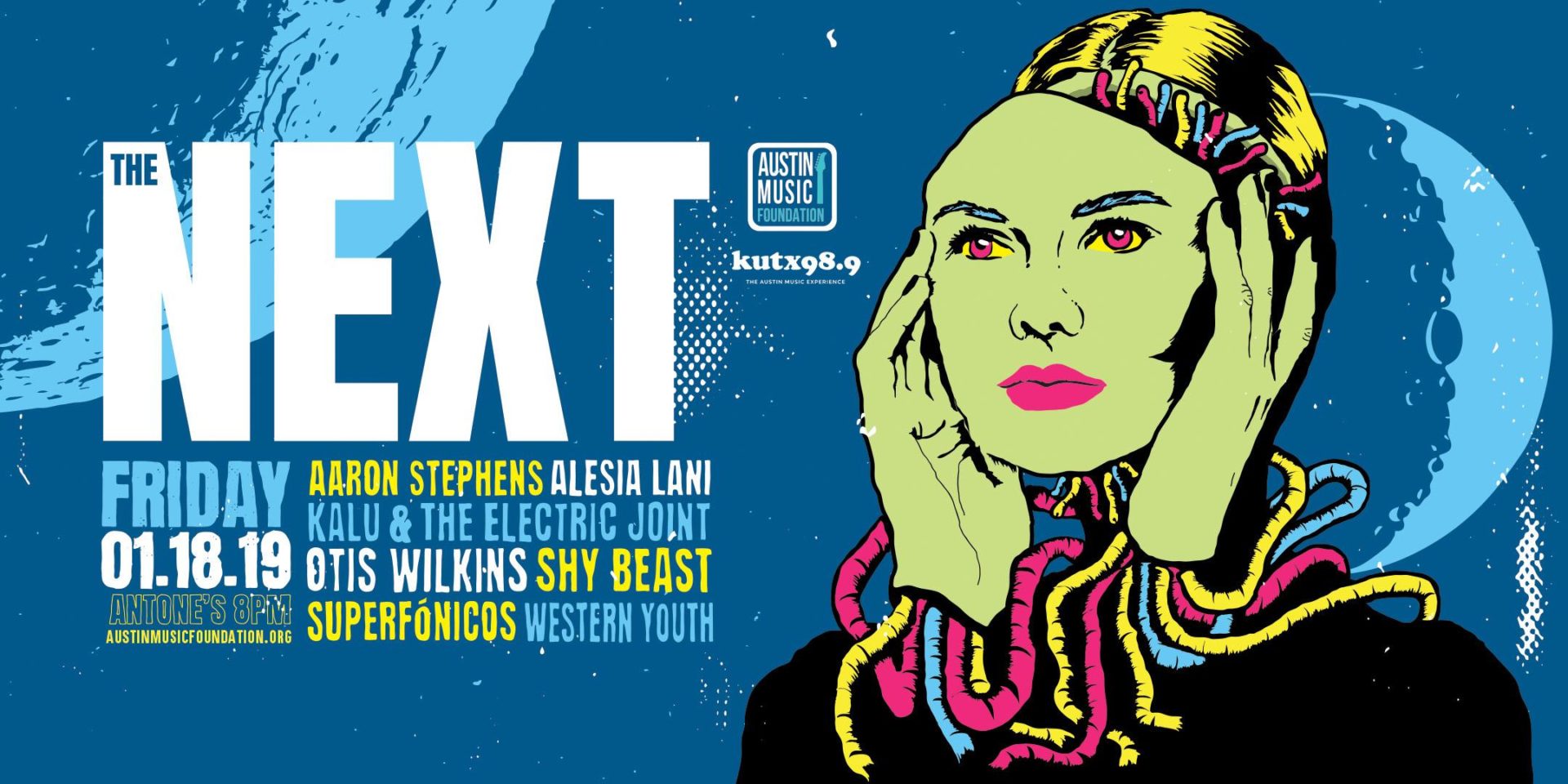 Austin Music Foundation and KUTX are proud to present The NEXT, an artist showcase featuring the next and best in Austin music.

Our second year of the Artist Development Program (ADP) is coming to a close and we’re ready to celebrate! The NEXT is our way to showcase these hardworking bands. Join us at Antone’s Nightclub on Friday, January 18 for performances from all 7 of our current program participants: Aaron Stephens, Alesia Lani, Kalu & the Electric Joint, Otis Wilkins, Shy Beast, Superfónicos and Western Youth.

General admission and VIP tickets are available! GA tickets start at $15, but will increase to $20 on January 1. VIP tickets are $75 and include a pre-show artist & industry happy hour plus drink tickets, commemorative AMF YETI tumbler, and a swag bag of assorted Austin music goodies.

Aaron Stephens stormed into the Texas music scene with his debut album, “Hard Times, Straight Lines” in 2014 and has been building momentum ever since. His soulful, rich and versatile vocals evoke nostalgic soul legends. Stephens furthers his sound with funky rhythm and melodic lead guitar, weaved together with stirring, heartfelt lyrics addressing the times we live in, the loves we discover, and the power of soul. In 2018, he released his first self-produced full-length album, “Focus.”

Every so often we experience an artist who has an inherent star quality to them that makes them special, and Alesia Lani is one of those rare few. The past few years have seen Alesia really come into her own as an artist and performer, combining her distinctive, soulful voice with electrifying performances. Alesia Lani is on a mission to bring R&B music to the forefront of the Austin music scene, and there isn’t anything she’s willing to let get in her way.

Kalu and the Electric Joint blend the powers of psychedelic soul music with the driving beat of rock and roll and the ancient rhythms of Africa. Born in Nigeria, Kalu relocated to Austin, where he put together a stellar ensemble of players who graciously fuel and follow his deep well of eclectic influences. The group’s new record, Time Undone is a sonic masterpiece of original tunes with a positive message and soul-stirring beats. The arrangements are masterfully crafted allowing the songs to breathe and flow. From the first note, these musicians show that they’re prepared to carry modern music forward while still paying tribute to the inspirations of their past. Their music invokes a wide range of emotions while influencing with an uplifting message through masterful playing. This band comes to play and when they do, the dance floor never stays empty.

Otis Wilkins is the moniker songwriter Taylor Wilkins uses when he’s not performing in his rock ‘n’ roll band Otis the Destroyer. Otis Wilkins is a compelling expression of the spacious, dreamy side of Taylor Wilkins’ art. This year he released his “Strangest Place” EP. Mostly self-produced, the EP is a collection of songs that took root after Taylor was invited to travel abroad in the fall of 2017 as part of Project ATX6.

Mariclaire Glaeser’s quirky musical persona has been turning heads in Austin for some time, and in 2017, she introduced Shy Beast and offered its complex and appealing music. The music showcases Glaeser’s immense vocal range and tones of diamond clarity.  Her voice is feminine but also liberated and absolutely commanding of the songs. This fall, Shy Beast released their second EP, ‘Leave Me/Let Me.’ The band’s high energy live show is supported by equally compelling visual production, establishing their unique performance art style.

Superfónicos is Colombian Funk. Better yet, it is Caríbe Soul…fed by the Indigenous and African roots of the band’s Colombian heritage, telegraphing a politics of peace and unity from the stage to your ears. This past year they performed at ACL Fest and KGSR’s Blues on the Green. Their latest EP, titled “Suelta,” is full of inspiring messages of positivity and love, encouraging listeners to “dance toward a place in your mind beyond struggle and strife.”

In 2018, Western Youth released their first album since 2013. The past five years were colored by life changes, unfulfilled dreams, honest and flawed relationships, and an uncertain world.  The result of all this is an evolved but still defiant Western Youth – introspective and poetic, but full of piss and vinegar, a unique sound that staggers artfully between rock n’ roll, folk, americana, and something, well, more grown up. This collaboration of accomplished songwriters and musicians is leading the alt-country charge of the 21st century.

About the Artist Development Program

The Artist Development Program (ADP) was designed by the Austin Music Foundation alongside leading music industry professionals. The intensive seven-month program aims to prepare a select group of emerging Austin artists to take their careers to the next level. ADP artists work closely with a team of mentors through both one-on-one consultations and classroom-focused group sessions, where artists are encouraged to discuss their goals and share ideas with peers.