IN SYNC: Pitching to Music Supervisors 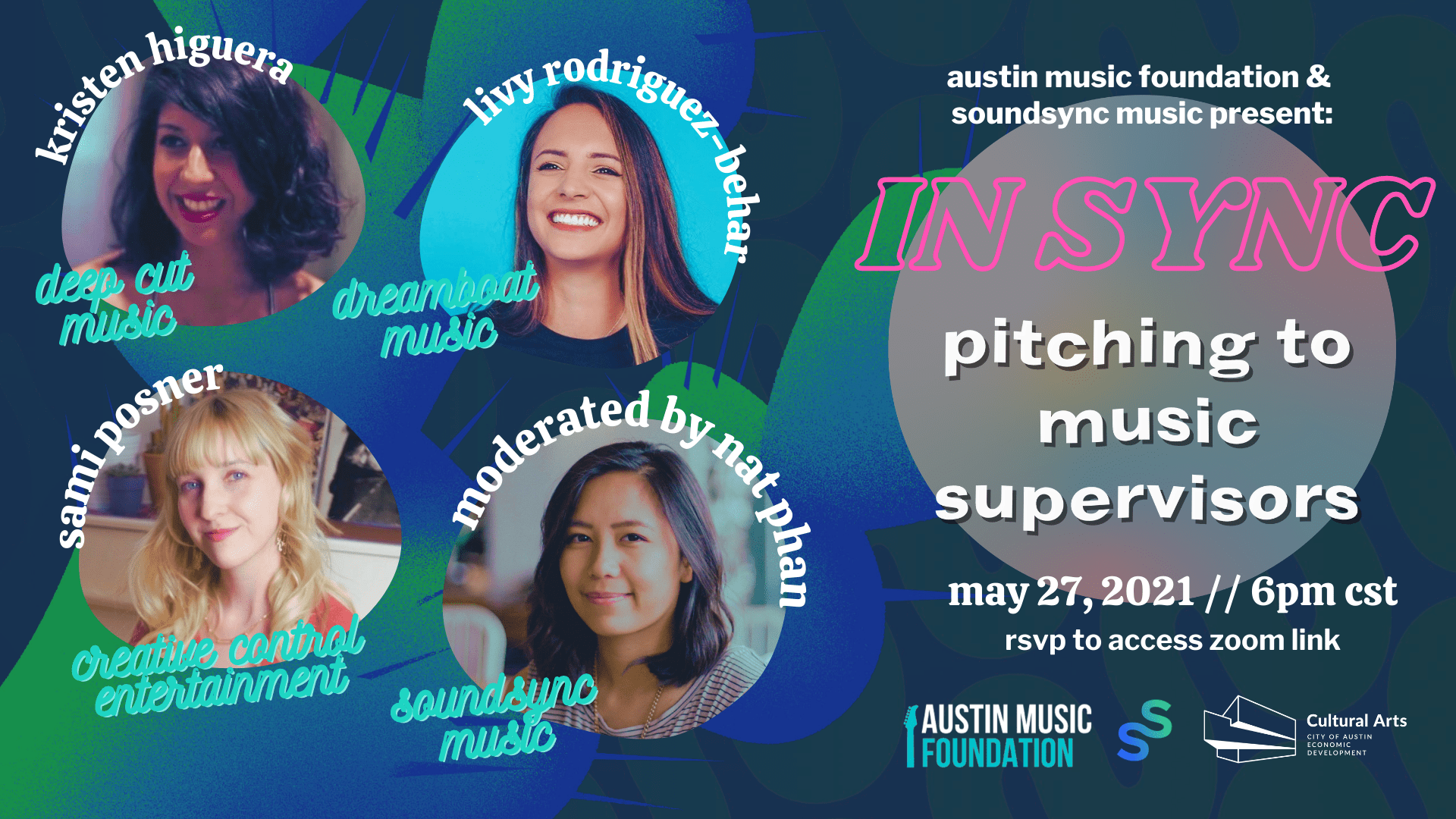 Austin Music Foundation and SoundSync Music are proud to present IN SYNC: Pitching to Music Supervisors, an online workshop and panel discussion focused on sync licensing. This free and informative session will begin with an introduction to sync licensing led by SoundSync Music founder Nat Phan, followed by a 1-hour panel discussion with music supervisors Kirsten Higuera (Deep Cut Music), Livy Rodriguez-Behar (Dreamboat Music), and Sami Posner (Creative Control Entertainment). Attendees are encouraged to submit their questions in advance through the RSVP link.

Learn more about our speakers below, and RSVP to submit your questions. This workshop will be live-streamed to the AMF Facebook page. This event is supported in part by the Cultural Arts Division of the City of Austin Economic Development Department.

Named one of the Austin Chronicle’s “20 of 2020,” Nathalie Phan (see also: dog mom, bad tennis player) sees entrepreneurship as a responsibility as much as it is a privilege. As a values-oriented leader born and raised in Houston, she has made it her life’s mission to put Texas musicians on the map. In 2015, while still a Digital Media Management student at St. Edward’s University in Austin, Texas, she founded On Vinyl Media as an umbrella organization for her many creative ideas on building and sustaining a local music ecosystem and local music industry infrastructure. One of the businesses under this umbrella is SoundSync Music, a boutique sound design agency which licenses local music to both indie filmmakers and large production houses alike. In her official capacity, she has led and participated in workshops, panels, and university guest lectures on entrepreneurship and music licensing.

Nathalie is the Asian-American and 1st generation daughter of Vietnamese refugees. She has been on the boards of multiple equity-related music non-profits such as EQ Austin, Kids in a New Groove, and Girls Rock Austin and is known to advocate locally for musicians’ rights, specifically on equity-related topics.

Austin-based Kristen Higuera got her start in advertising and audio-branding. She has worked at boutique agencies in London, where she helped curate the sound for global hotel chain citizenM, and in New York City, where she sourced and secured music licenses for international advertisements for clients including General Motors and Walmart.

In 2019, Kristen made the jump from advertising to film & television. She is now a music coordinator at Deep Cut Music where she has worked on The Great (Hulu), Bosch (Amazon), Generation (HBOMax) and many more.

Livy is a music supervisor, and the founder of Dreamboat Music – a music supervision company based in Austin, TX. She has worked on musical branding projects for companies such as Disney, Warby Parker, Tory Burch, Target, and TomTom. Additionally, she worked on film and television projects for Martin Scorsese, Richard Linklater, Robert Rodriguez, and others.

Born and raised in the Live Music Capital of the World, her appreciation and education for music began at an early age as both a performer and a fan. She was in choir for 10 years, including her time attending McCallum Fine Arts Academy where she furthered her education with classical training in vocal music and music theory. Her passion then inspired her to obtain a Bachelor’s Degree in Music Business at Full Sail University. There, she earned the Valedictorian title of her graduating class as well as the Advanced Achievement Award, which recognizes accomplishments outside of the classroom. After graduating, she landed a position with Facebook’s music team, conducting metadata research and music licensing. Currently, she manages a vendor team of 77 music experts for YouTube Music across North & Latin America, in addition to running her own music supervision company, Dreamboat Music LLC. Dreamboat, while a young company has gained the attention of different conferences and festivals inviting Livy as guest speaker to the likes of SXSW, CD Baby’s DIY Musician Conference and BabesFest. Her films have circulated notable film fests such as Tribeca and gained distribution on popular platforms like HBO.

Sami Posner is a music supervisor and songwriter from Los Angeles, CA. After attending Berklee and graduating top of her class from CSUN, Sami quickly found a place for herself in the world of music supervision working with veteran music supervisor and Guild of Music Supervisors President, Joel C. High at creative control entertainment. Sami has worked on a wide range of projects from TV and film, including the Netflix record breaking film, “A Fall From Grace” and live theater to videogames, most recently as a licensing consultant for EA’s FIFA 21 and NHL 21. Sami has worked on Tyler Perry’s latest television series, “Sistas”, “Bruh”, “Ruthless”, and “The Oval” as well as the Nickelodeon series “Young Dylan” and is currently working on second seasons of all.

Most recently, Sami worked on Hallmark film “Christmas in Vienna”‘ and Lifetime film “Feliz NaviDAD” for which she oversaw and organized the a capella recordings remotely during quarantine. She recently completed work with Joel C. High on the now released blockbuster “Emperor” featuring the song “I’ll Get There (The Other Side)” by Diane Warren and performed by Emeli Sande. In addition to her supervision work, Sami works for the Guild of Music Supervisors, managing their six craft committees and has been instrumental organizing many of their live and virtual events as well as helping to champion their mentorship program.